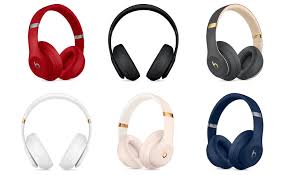 Beats Studio 3 Wireless headphones are now available to preorder from Apple and will ship in mid-October. In terms of external appearance, Studio 3 headphones are much like its predecessor Studio 2, though Beats says the new pair of headphones have been re-designed, and the ear cushions have been improved so as to be more comfortable for all-day wear. With two limited editions included, there are six colors to choose from – shadow gray, porcelain rose, matte black, white, red, and blue.

Studio 3 Wireless headphones include Apple’s W1 technology to make pairing with nearby iPhones, iPads, and Macs effortless and immediate. It allows automatic syncing between Apple devices logged into the same iCloud account. Now the entire lineup of wireless Beats headphones are featured with the clever W1 chip.

Studio 3 is featured with Apple’s new Pure Adaptive Noise Canceling (Pure ANC). The reengineered noise cancellation system delivers a premium listening experience by sampling your surroundings and algorithmically adjusting the strength of noise cancellation. It also compensates for leakage due to hair, glasses, or other factors.

The battery life has been improved on Beats Studio 3 Wireless headphones. With noise cancellation turned on, the headset can manage up to 22 hours of playback. If Pure ANC is disabled, the Studio 3 should reach battery life of 40 hours without changing or degrading audio quality. Besides, Studio 3 also supports Fast Fuel feature. According to Apple, 10 minutes of charging can provide 3 hours of playback, and the charging is via a microUSB connector instead of Apple’s lightning connector.

Here are the prices for Apple’s current-generation wireless headphones lineup:

Apple will hold the new products conference on 12 Sept. Do you anticipate it?