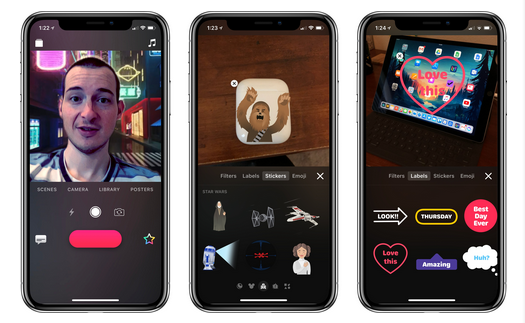 Clip 2.0 adds support for Super Retina display on iPhone X. the interface becomes more streamlined and easy-to-use. Photo button appears on the main capture screen for quick access. Four tabs appears below the viewer for switching between Scenes, Camera, Library, and Posters. New added full-screen browsers let you view more in photo library and posters. You can now tap to preview a filter before applying it.

Selfie Scenes feature allows iPhone X users to make clips in a dozen animated scenes by using the front-facing TrueDepth camera. The camera is able to discern foreground and background objects, so that you can be recognized and placed in the foreground, with other objects behind you filtered out. The currently available selfie scenes include Metropolis, Riverfront, Millennium Falcon, Mega-Destroyer, Sketchbook, 8-bit, Tea Garden, Cityscape, Galactic, Stickers, Graffiti, and Brushstrokes.

The scenes are 360-degree, which means you can move around when making a video of yourself and the scene continues to change like you were actually inside.

Besides, Clips 2.0 introduces a list of new filters, stickers, posters, and music. New filters utilize machine learning and style transfer technology to enable real-time artistic effects. You can turn your videos into a charcoal pencil sketch, watercolor, or oil painting style in real-time. New Stickers are based on Disney characters and include Luke Skywalker, Darth Vader, R2-D2, and Princess Leia from Star Wars. You will also find 16 new Apple-designed stickers and 21 new royalty-free indie artist soundtracks. Those soundtracks change in length to match the duration of your video.

Additionally, Clips 2.0 now works with iCloud. Full Clips projects are synced via iCloud, therefore you can create a video on iPhone but edit it in another iOS device.

Clip initially released back in April and received first update in July. Apple previously reported that this app has garnered over 1million monthly users. Have you tried it yet?