Released in 2014, Workflow is a well-known and popular automation app that won an Apple Design Award in 2015, it allows users to group a bunch of actions so that they can perform complicated tasks with one tap. On Monday Workflow was updated to version 1.7.5, which mainly includes bug fixes and compatibility improvements. 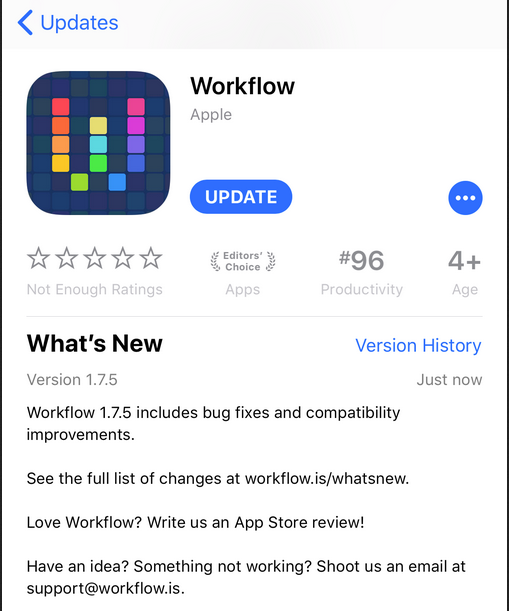 Here is the full list of changes included in the version 1.7.5:

In March of this year Apple acquired Workflow and the team behind this app. Workflow’s creators – developers Ari Weinstein, Conrad Kramer, and Nick Frey – have joined Apple. Instead of killing the app, as Apple usually does when it acquires a startup, Apple made Workflow free and continually available on App Store. It used to cost $2.99, which was a fair price. Workflow currently supports more than 200 actions with integration into Apple apps as well as third-party services, and there is a built-in Gallery that allows users to quickly select desired automation tasks if available.

In an email from Workflow support sent to a user of the app, the company has confirmed that it had “no further planned updates for Workflow”, though it will continue support the current functionality and has no intention to abandon the app.

The question now is whether some of the capabilities in the Workflow app could work their way into iOS itself. As members of Apple, the app developers are able to take advantage of APIs and resources to further develop the functionalities. It is predicted that Apple will include Workflow directly into iOS 11 due to release in this fall.

Have you tried this app yet? To know more info about Workflow, see this page.